What if I’m not “good enough” to teach my child a foreign language?

Have you heard that voice that whispers, “I’m not good enough to teach my kids. Like, who am I to actually do this? I’m in way over my head!”

Well, Elizabeth definitely heard this voice when her oldest daughter was trying to learn French for years.

But this voice started with Elizabeth not feeling like she was good enough to learn foreign languages.

In high school, she spent three years learning Spanish, preparing for the AP Spanish Exam by watching novellas and South American beauty pageants with her class. I can already picture what her Spanish teacher looked like… In short, she totally bombed the AP exam.

After all of that language experience, the only language that pulled through was Danish, which allowed her to have simple conversations… but then forgot it as soon as she returned to the United States.

And that was that. She decided that she just didn’t have an aptitude for languages.

Novellas, grammar, vocabulary, and even immersion didn’t get her there.

She was a language learning failure in her heart.

Then she had kids, so she took another try at it because she really wanted to raise her children to be bilingual. After all, her mom was a first-generation American-Mexican whose family was shamed into not using Spanish. This was something she really wanted her family to have back.

As a homeschool family, they tried a few different French and Spanish programs, and the approach in those programs was all the same: grammar, vocabulary, and a few introductory phrases, like, “How are you?” Nothing was comprehensive. And nothing was really working.

As her family made little progress, the thought came to Elizabeth again, “Languages aren’t my thing.”

Which totally breaks my heart because moms are the most successful language teachers in the world! She has everything she needs to do this! Elizabeth, it’s not you! It’s them.

Then she heard about TalkBox.Mom. Thank goodness, right?! But she actually shelved it because she had a difficult pregnancy and a newborn.

Once life was settled after having their newborn and began using TalkBox.Mom, she realized that her family uses every day. Not phrases telling her how to find the train station or the bakery, but actual, useful phrases.

So she simply started using them little by little, as her family listened to the native speakers in the TalkBox.Mom Companion App say each phrase.

Phrases like, “You need to clean your room,” “Let’s play outside,” and “We have a stinky diaper,” allowing her to use phrases with all her different aged children.

While her family isn’t proficient yet, they are making progress–progress that she’s super excited about!

Her dreams of raising bilingual kids are starting to come true, and she’s even incorporating phrases with her baby on a daily basis, so her baby will have a good foundation in the several foreign languages that she’s working on with her older children.

But the most important change? Elizabeth now has the confidence to use foreign languages in her everyday life.

She’s not a language learning failure.

She actually never was one.

I mean, who taught her kids English? She did!

She just needed to teach a foreign language like a mom: using phrases in the moment as life happens.

And as I see her progress in the TalkBox.Mom private Facebook group, in my eyes, she’s totally more than enough!

If you’ve ever felt like a language learning failure, definitely start with our program by choosing the language you want to learn, and use the code GOODENOUGH to get $20 off your first box and book this week!

We’re the best price for a language immersion experience, and most importantly, it will help you to be even more confident.

You won’t waste your time for years feeling like a language learning failure.

You’ll jump in and start using the language right away as we hold you by the hand to reach your language learning dreams with confidence. Plus, in our private Facebook group, we do weekly trainings that are like a giant fire extinguisher putting out that little voice in your head that whispers that you aren’t good enough.

Because you’re a mom. You’re more than enough. 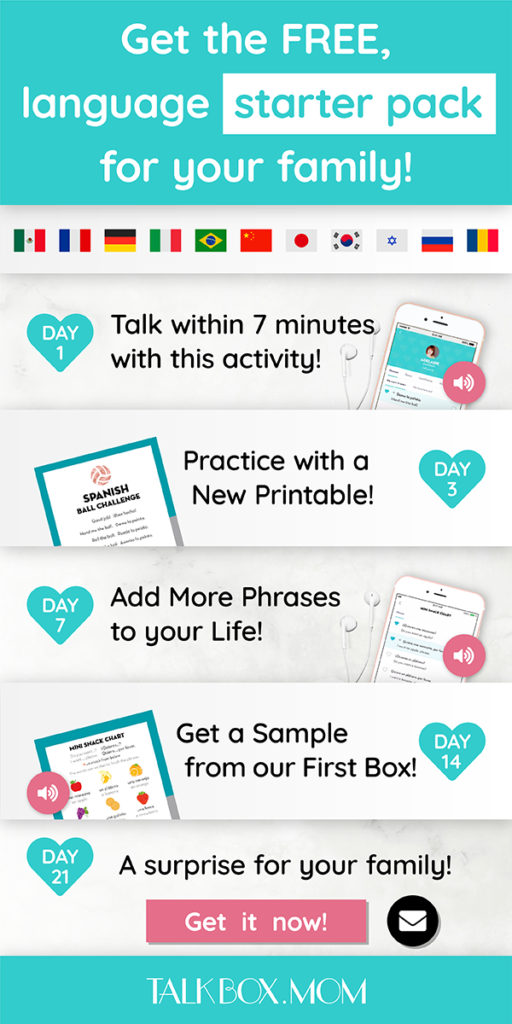 What if I'm not "good enough" to teach my child a foreign language?