There were no flash cards, grammar rules, nor conjugation charts.
0
By Adelaide Blog January 23, 2017

As non-Spanish speakers, we learned Spanish with our neighbor’s cat.

We learned Spanish as we got in and out of cars.

We learned Spanish while we ate.

All we had to do was replace what we normally say in English with what a native Spanish speaker would say in that situation.

Isn’t that how we learned English anyway? By talking and being talked to?

We could talk and understand each other immediately. It was natural and fun.

It was unschooling Spanish.

There were no flash cards, grammar rules, and conjugation charts.

We learned Spanish as life happened. I don’t see why your family wouldn’t be able to do the same thing.

You can talk in Spanish as you get in the car.

When your kids are driving you nuts.

Go from knowing nada to using Spanish in your home.

And when people ask how you learned Spanish, just tell them you didn’t have to. You played with an adorable kitten instead.

Start with over 1,700 phrases and listen to the native speaker audio on repeat.

“We’re outside riding bikes and speaking Spanish. Like a boss.” 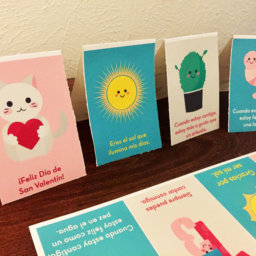